Welcome to the 2012 Goblin Calendar!

Last Night as I was trying to think of something Goblinish to start off the calender I stumbled across this picture,

Being a big fan of Labyrinth of course I couldn't resist. So here is a clip from the movie with some lovely goblin masks,

A link to one of my favorite webcomics staring Jareth the Goblin King and Erik the Phantom,

And some of my favorite De-motivational posters with the Goblin King. Enjoy!

For the December 26th Goblin Calender

This is a good time of year to share Christina Rossetti's poem, Goblin Market. Make yourself a cup of tea and settle down to read the whole thing:

or, if you prefer, listen to it:

I am impressed! I did not know about the

Goblin King (and Bowie seems so fit in the role)! And the poem, it is one of my favourites, early feminist critique to capitalist market (wow!)...
Thank you both!

The Goblin inside is looking forward to next treats!

I was so intrigued by the Goblin Market poem that I googled it and found this site which has lots and lots of information about the poem, including a line-by-line breakdown, discussion of themes such as sexuality, women and femininity, and more, all written to be easily read and understood by students: Goblin Market

It just became Dec 27 in my part of the world.

Sometimes I believe some of the goblins sneak out of the underworld outside the Dodecameron days to make people misbehave in some way or the other.

You've probably all heard of Cake Wrecks - when professional cakes go horribly, hilariously wrong. Early in December last year a Norwegian company ordered two cakes from their local bakery for their annual Christmas lunch and wanted «Merry Christmas» («God jul» in Norwegian) written on both cakes. To their suprise, they only got one cake where the text said: «God jul på begge kakene». In English: «Merry Christmas on both cakes». Oops.. 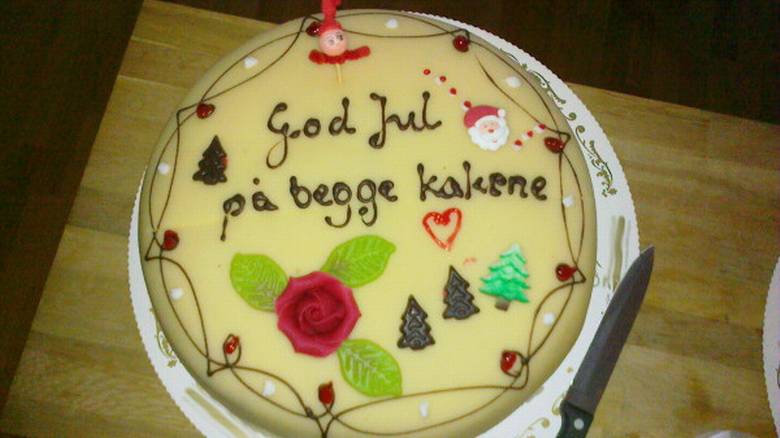 This made one of the biggest newspaper collect other cake wrecks. One of the contributions was a lady telling about her ordering a cake with a picture of her dad for his birthday and with the order, she gave the bakery a CD with his picture. And the cake had a picture of a CD, not her father:

And another one from the same compilation (no explanation needed):

Now all this cake talk probably makes you want to make goblin cake, so here you'll get some inspiration for goblinish cakes:

Yes, this is what exactly do Goblins with cakes! they mess up the ingredients changing tins for sugar and salt, they destroy butter, they sprinkle fine suger every where and they eat what has been prepared so the cook of the house gets desperate to find one cake out of two or silly jokes over the pies..

Daimona said:
Early in December last year a Norwegian company ordered two cakes from their local bakery for their annual Christmas lunch and wanted «Merry Christmas» («God jul» in Norwegian) written on both cakes. To their suprise, they only got one cake where the text said: «God jul på begge kakene». In English: «Merry Christmas on both cakes». Oops..
Click to expand...

:lol: I love that this kind of goblinery/ stupid knows no national boundaries.

It is not stupid, it is mess celebration

in opposition to order and predicted life!

Goblin is the creature of our imagination which longs for the unexpected...

Hmm... stupid or goblins? IMO it's another version of conspiracy vs. cockup and when it comes to cake decorating at that level I will vote stupid every time. OK, most times.

OTOH I'm pretty sure it's the goblins fault I found the cache of that crazy article last night and reposted it. . It's not my fault I poke things with sticks to see what happens, it's the goblins. Only that's pretty much all year round... :think: ...

Best dance number with gnome/ goblin/ troll things. You have to love the concept of telling yourself you're a vessel of shimmy.


All those Bowie pictures on this thread made me think of Bowie's 1967 classic "The Laughing Gnome". (Check it out on YT if you can face it), and on the Wikipedia entry on it I found this:

In 1990, Bowie announced that the set list for his 'greatest hits' Sound+Vision Tour would be decided by telephone voting, and music magazine NME made a concerted effort to rig the voting so Bowie would have to perform "The Laughing Gnome" (with the slogan "Just Say Gnome"), but the voting system was scrapped.
Click to expand...

Now that kind of vote rigging to make people's publicity bite them in the behind is true goblin spirit IMO.

And Googling for goblins and belly dancing found (apart from references to this calendar and previous year) this - Knob Goblin Harem Girl - TheKolWiki
which made me LOL and sort of want to join up...

I've always gotten a kick out of that video Aniseteph. :lol:


Aniseteph said:
All those Bowie pictures on this thread made me think of Bowie's 1967 classic "The Laughing Gnome". (Check it out on YT if you can face it)
Click to expand...

*goes to look* Well that was... unexpected. It would have been hilarious if they hadn't scrapped the voting and he actually sang it. :lol:

Guess what else I found?

That is perfect girls!, i laughed very much!

Well, what about 29th? since i have not seen anyone registering for 29th, i take it over.

Anyone for the days which remain open?

Sign me up as needed and let me know which day. I'll be home as far as I know.

Ariadne, you have helped very much already!

And, i cannot accept that Goblins did not come up to the upperworld this year...
You Goblin-dancers, where are you?

I had some time today after all so...

I give you the Goblin Shark.

Overview - Form may follow function, but it does not always have to be pretty. While the goblin shark is well adapted for its deep-sea habitat, some people have referred to this fish as “the ugliest living shark.” Still others liken it to an alien from outer space. Its mostly pink body contains soft, flabby flesh. Perhaps its most distinguishing feature is its uniquely shaped head. The shark’s beak-like snout protrudes like a trowel, making it perfect for investigating muddy ocean bottoms. When the goblin shark retracts its jaws, the snout looks more like a really long, pink nose. Since this shark frequents deep waters, sunshine does not provide much light at such levels. The goblin shark, therefore, has very small eyes, and must often rely on its other senses for detecting predators and prey, as well as for directing movements.​

I can take over the New Year's Eve if no-one else is interested in being the goblin of the day!

I was last minute on the Advent calender so I'm going to balance that by being a bit early for New Year's Day (hey, it's already tomorrow in Oz, right?)

Seems like the goblin calender is the place for my semi-annual posting of the following. Please take a number and we'll be right with you.

Announcing the Shanazel School of Belly Dance Arts! All your questions answered in unarguable phrases! Movement vocabulary carved on stone tablets harvested from the pyramids! Firm division lines for dance styles and fusions available for $10 a dozen. Certifications a specialty. Be the first in your neighborhood to receive the gospel from The High Grand Snickelfritz of Belly Dance herself, and amaze your friends with your expertise at your next hafla. Costumes, choreographies, and lattes also available. The first hundred dancers to sign up will receive their choice of a pink stuffed boa constrictor or a year's subscription to The High Grand Snickelfritz's newsletter, The Syncopated Dancer. All acolytes passing a series of arduous exams will be allowed to perform with Shanazel's troupe, The Belly Button Jewels of the North Platte.