Welcome to the 2012 advent calender!

Daimona, thanks for all the shamadan clips. My troupe is going to be working on a shamadan dance sometime in the near future (I hope), so I am watching as many shamadan performances as I can.

Not exactly Christmas-specific, but here is a song appropriate to the season:
George Harrison-Give Me Love (Give Me Peace On Earth) - YouTube

Perfect for the calender, the season, and the whole year.

Thanks, Jeanne. Hadn't thought of that song in a long time. :clap:

Mosaic said:
Daim enjoyed watching the vids, not sure if I have the courage to attempt the tray & candles dance, but I do like it, maybe I should cheat & blu-tack the candles onto the tray
~Mosaic
Click to expand...

I did it once but I have a sloping head* so I need something underneath the tray and that takes away from the effect.

*so it I want to keep the tray on I need to tilt my head back and it looks very weird!

Amulya said:
I did it once but I have a sloping head* so I need something underneath the tray and that takes away from the effect.

*so it I want to keep the tray on I need to tilt my head back and it looks very weird!
Click to expand...

I saw a video of Moroccan dancers dancing with trays & they had scarves in the colour of their costumes rolled into a ring and they placed the tray on top of that. I don't know if that is culturally correct or specific to Morocco, but it worked well

To Jeanne - thanks for George Harrison's song - I love that
~Mosaic

Yes that's what I did, that roll thing to stabilise the tray but it looks like cheating

<rushes in slightly out of breath, I'm late, I haven't forgotten>

I was inspired by Shanazel's list of festivals and days for December to take an extra day this year. Today is Beethoven's birthday*, so

Belly dance tie-in and edukational point - layering and phrasing, there ya go.

Here's a more festive one:

My candle tray is shaped with an indentation that fits on my head, it's not noticeable when I am dancing or even when I am putting the tray on my head on stage. I also wear my wig when I'm dancing, and that gives me enough of a cushion on the top of my pointy slippery little head to balance the thing. I have a video on YouTube if you want to see the tray.

The classical radio station in Denver used to have a gala celebration each year on this date. Don't know if they still do.

I'd have to melt wax into my hair to stick a tray to my head. Either that or tie the tray on with a scarf that goes under my chin a la Queen Elizabeth in country dress.

It is already midnight here, but a big part of the world is still enjoying the 17th December, right!?

So, during the winter, you can often hear really funny noises from the office computers. That is because we are all closely following the forest-cam. It shows a live picture from a feeding place for wild animals. Of course, they don't have a regular schedule to visit, so you have to keep the camera open all the time...
Metsakaamera | looduskalender.ee (click on the picture to see the cam)

If you are really lucky, you'll see wild boars

But if you don't have the time to wait for the animals to appear, you can check the live cameras from Tallinn zoo and see if you spot any elephants Interaktiivne Tallinna Loomaaed

Oh, and those of you who are thinking of being crafty this Christmas, here is a Christmas tree idea for you

Hahaha! What an awesome tree!

:lol:That is so cute & fun
~Mosaic


A recipe which I have made from Mrs. Claus' Cookbook - Oreo Surprise & they were very popular with the men of the house & visitors. I had to change some ingredients to Australian equivalents. 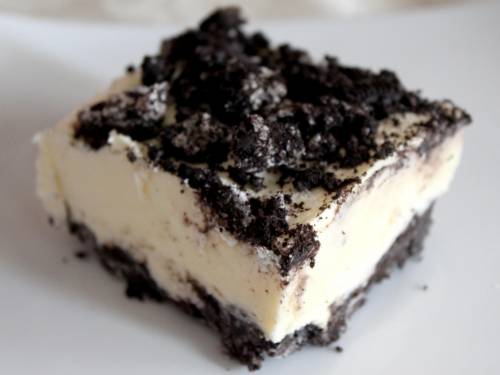 Mix together Oreos and oleo; press into a 20x30cm baking pan (or as the website says a 9 by13-inch pan).

Mix pudding, milk and cream cheese together, beat with dairy whip or cream and pour onto the oreo crust.

Then sprinkle with remaining cup of oreo crumbs and freeze.

Top with a small Christmas holly leaf or a cherry, if serving at Christmas or for kids birthdays, sprinkle with 100s & 1000s or choc sprinkles - let your imagination run wild

Some belly dance fun (I think this may have been posted last year, but it's a good one):
Drum Solo and All I Want For Christmas Belly Dance Fun by Cassandra Fox - YouTube

It's going to be a delicious Holiday Season.

Morning all! I have for you another delicious recipe to add to your holiday and anytime cookbook. It's been a tradition in my family for years to eat these the morning of Christmas before opening presents.

Prepare waffles as directed. Once finished cut waffles into smaller sizes and scoop ice cream onto a piece of waffle and follow with another piece of waffle to make the sandwich. Top with optional berries and powdered sugar, along with any other topping you desire, and of course enjoy!

And for a little laugh, a little story about the fairy some place atop their tree.

A Tale of the Christmas Tree Fairy

I'll tell you an old Christmas story,
As we sit round the log fire at night
Why each Christmas Tree has a fairy on top
And why Santa's beard is so white.

It happened one winter in England,
On a dark Christmas Eve long ago:
There was Santa out doing his rounds,
And playing on t' sledge in t' snow.

He were taking all t' presents to t' houses
And then, when that first job were done,
He went round once again wi' his fairies,
Putting Christmas Trees in every one.

Now just when he thought he might finish,
And last house were almost in sight,
He went to fetch more trees off toboggan.
And he found he were just four trees light.

This discovery quite upset Santa,
So he gave to his reindeer a shout (whoa up!)
And he sent for his Christmas Tree fairy,
To chastise her for leaving them out.

Eeee by gum, tha's a daft little fairy,
Tha's as daft as a fairy could be,
When tha packed up t' sledge this evening,
Tha must'uv missed off some of t' trees.

"Oh Bugger" replied little fairy
Which were really quite un-fairy-like
"I'll have to go back to t' factory
And with that she jumped on her bike.

"Hold on just a minute" cried Santa
"There's a way that won't let you forget
Fetch one tree for each of your fingers
On t' right hand, you'll get it right yet".

Then off like a shot went our fairy,
Much faster than light from the sun,
Cos Einstein hadn't yet been invented
So she wasn't to know it weren't done.

Now if you could have watched little fairy
There were trouble to come you could tell,
For when she was counting her fingers,
She'd counted her thumb in as well.

Now Santa, he'd waited for hours
'Till his patience were running quite dry
'Till at last he saw t' fairy pedalling
For all she were worth through t' sky.

But then as the fairy got nearer,
Santa's anger it grew more and more
He could see from the load she was bearing
That she'd fetched him five trees and not four.

Then Santa got redder and redder
Started roaring with all of his might
Till the glow from his nose outshone Rudolf
And his beard it began to turn white.

"Why tha's stupid" he yelled at the fairy
"Tha's four times as thick as I'd thought.
Now go and put trees in last houses
And as soon as tha's finished: - report!"

So straightway off went our fairy
And as soon as she'd finished last place
She brought fifth tree back to Santa,
And waved it in front of his face.

"Whatever shall I do with this one?"
Our innocent fairy enquired,
So Santa he upped and he told her
'Cause by now he were feeling right tired.

The fairy she looked up at Santa
And her face it turned a mite red
But then, like the good little fairy she was,
She went and she did as he said,

So now at the end of my story
You'll see why to this very night,
Each Christmas Tree has a fairy on top
And old Santa's beard is quite white.

Hope you enjoy and Happy Holidays!

Dunyah said:
Some belly dance fun (I think this may have been posted last year, but it's a good one):
Drum Solo and All I Want For Christmas Belly Dance Fun by Cassandra Fox - YouTube
Click to expand...

I love her outfit! And it's an amazing dance!

Amulya said:
I did it once but I have a sloping head* so I need something underneath the tray and that takes away from the effect.

*so it I want to keep the tray on I need to tilt my head back and it looks very weird!
Click to expand...

You could try a one of those poof hairstyles, or a "Bump it" to rest the tray on your hair will be the balance without really adding anything that will show.

Safran said:
Oh, and those of you who are thinking of being crafty this Christmas, here is a Christmas tree idea for you