I thought this festival was a bd festival...

kaza26 said:
I think I saw it before...I think you can call it a bellydance...very modern and very physically challenging.. this is the only video I saw of this kind of dance..so welcome for the new generation of bellydance!
Click to expand...

Shanazel said:
:shok::redface: (Smacks herself on the forehead). Oh! What was I thinking? You are absolutely right, Walladah. We'll just stick with the gong and the hook, then.
Click to expand...

Is it called carp because it is fishy?

Shanazel said:
Is it called carp because it is fishy?
Click to expand...

I admit, when I read "rejecting carp," I thought of "catch and release."

Khanjar definitely has inadvertently hit the nail on the head with that one. Something about a red snapper on display :naghty:

Jane said:
Khanjar definitely has inadvertently hit the nail on the head with that one. Something about a red snapper on display :naghty:
Click to expand...

I thought the festival was a bd festival

From what I'm reading glad about having dial-up and not being able to watch. That said, Shannie we should throw old kimchi, the scent will never leave her costume and will warn others away.
J

I agree this is not bellydancing.

But I also disagree with those who called this a stripper dance. Some bellydances are sensual and you guys get offended when they misinterpreted it and gymnastics girls spread their legs but there not called strippers. If the girl would have called the dance something else I think it would have been a good performance. I think she just needs to get directed to perform for a different audience.

Wonderful dancer & very talented, but overly sexual. Some BD elements, but not used in a BD-way. I wonder what kind of training she's had over her lifetime? :think:
T

AyaKara said:
Wonderful dancer & very talented, but overly sexual. Some BD elements, but not used in a BD-way. I wonder what kind of training she's had over her lifetime? :think:
Click to expand...

It's like she took the bellydance elements and reconstituted them into something that had no relation at all to bellydance: no relation to the music, and no logic as elements of dance. It's overtly sexual, but not at all sexy. The sexual elements are very mechanical-looking -- again, no logic or design to it...just humpy, throbby bits. It's deliberately avant-garde, and she's very limber and strong, but she missed the mark entirely, didn't she?

That is a total turnoff - frankly it was hideous!
~Mosaic

I've forgotten what's going on! *goes back to the first page*

Looking back on this, there is nothing, NOTHING pretty at all about this performance. Her technique was poor; her snake arms were frenetic, and her shimmies were the same: frenetic. In fact, she looked like a piece of flailing bacon in a hot frying pan. As has been stated, it's sexual, but not at all sexy. How on earth she was allowed to do this performance is beyond me.
Last edited: Oct 30, 2012

My thoughts exactly, Tiziri! :lol: she's a great dancer with plenty of control though, I have to give her that!

Farasha, you're so cute :lol:

Farasha Hanem said:
a piece of flailing bacon in a hot frying pan.
Click to expand...

I was curious to see what else she has done. There's a performance from the Mediterranean Delight Festival of *this* year (this is two performances):

The first dance to me looks like she's a good contemporary/lyrical dancer (but it's not very bellydance, is it?) I actually like the fusion "drum solo", unconventional as it is (very African dance in feel), although she does more of the dubious floorwork. The costuming...I'd like it for what she is doing, without the balls (they look like she's got puffball mushrooms tacked on). These are (IMO) two much more coherent-looking performances. What do y'all think?

But what is in the box? A hat? A cake? Growing medium for the mushrooms? I think she's lovely, but perplexing.
Last edited: Nov 3, 2012

Several months ago I was jumping around on YouTube in pursuit of something similar to the BD that I remember when I was an innocent young lad, and a Mediterranean Delight Festival clip came up in the related column. I've found a lot of good stuff in that column which I never knew existed, so I thought: Great! Mediterranean. That means Greece. Turkey. Morocco. Lebanon. Egypt!

I watched about two minutes of one clip, then two minutes of another, and maybe the beginning of another, and then I never clicked on one of those again. Y'know, I'm not really a mean person by nature who is out to discredit someone else's creative effort, but let's say this festival was just a little too non-traditional for the Old Erikmeister. I wish they would drop the "belly dance" tag, as it smacks of consumer fraud.

Tiziri said:
I was curious to see what else she has done. There's a performance from the Mediterranean Delight Festival of *this* year (this is two performances):

Lyrical dance to Loreena McKennitt in a cat toy costume with a box. 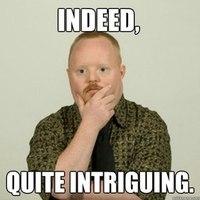 Jane said:
Lyrical dance to Loreena McKennitt in a cat toy costume with a box.

Yeeees, it is straight lyrical, isn't it?